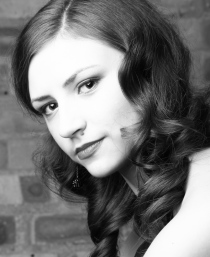 Ukrainian-American pianist Anna Dmytrenko has dedicated her life to music from a young age, starting piano lessons at age 4. Described as “a fine combination of keyboard mastery and elegant refinement,” she has performed extensively throughout the United States and Europe at such renowned venues as Carnegie Hall, Kimmel Center of Performing Arts, Lincoln Center, Temple Emanu-El, Auditorium Gaber, Paris Philharmonie, Salle Cortot, Popejoy Hall, and Teatro Sociale di Como, among others.

An active chamber musician, Ms. Dmytrenko was selected to participate in the Swiss Verbier Festival Academy in 2016. While studying in London for her Bachelor’s degree, Dmytrenko enjoyed performing both solo and chamber music in venues such as St. Paul’s Bedford, Windsor Parish Church, St. Mary’s Perivale, St. Martin-in-the-Fields, Steinway Hall, and Regent Hall, among others.

Anna Dmytrenko began her musical studies at the Mariupol School of Music in Ukraine. Following her relocation to the United States in 1998, she furthered her musical education at the Juilliard School Pre-College Division with Oxana Yablonskaya. She received her Bachelor’s degree with Regents Award from the Royal Academy of Music in London under the tutelage of Christopher Elton. She is currently based in Berlin, Germany, where she obtained two Master’s Degrees (in Solo and in Chamber Music) at the University of the Arts with Pascal Devoyon. In addition to her piano studies, Anna also completed Harvard Business School's Credential of Readiness (CORe) online program with honors.